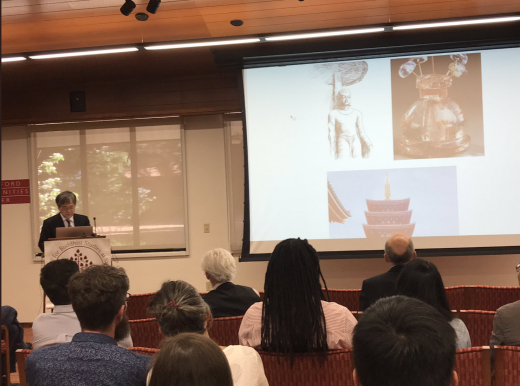 Soka University Professor Seishi Karashima, director of the International Research Institute for Advanced Buddhology, was invited by UC Berkeley’s Center for Buddhist Studies as a Numata visiting professor and delivered a lecture to the school’s graduate students.

Among them, my lecture at Stanford is uploaded to YouTube. I shared about how, using Buddhism as a bridge, the Indian culture spread to China and furthermore from China to overall East Asia. For example, the terms ‘past,’ ‘present,’ ‘future,’ ‘world,’ and ‘truth’ are translations from the Indian language. Chinese linguistics also emerged, influenced by Sanskrit. The 50 Japanese syllabaries ‘A Ka Sa Ta Na’ are also derived from the Sanskrit order. Hangeul letters are also related to Indian letters. In the latter half of the lecture, I shared how the Indian word chatra, which refers to an ‘umbrella’ that goes above Shakyamuni’s head, is transcribed into Sino-Japanese vocabulary such as ‘刹’ (chat) (名刹 etc.), which turned into ‘절’ (jeol) in Korean and then to tera (temple) in Japanese. This word is symbolic of the cultural exchanges that extend from India to Japan.

Also, Stanford, UCLA, and UC Berkeley shared how outstanding the publications from the Soka University International Research Institute for Advanced Buddhology are. Professor Schopen (UCLA), one of the authorities of Buddhology, praised the annual report of our institute as the top in the world. I was able to gain an understanding of the situations of Buddhology research at universities and research institutes in California and to have further exchanges with researchers, thus deepening bonds of trust.”