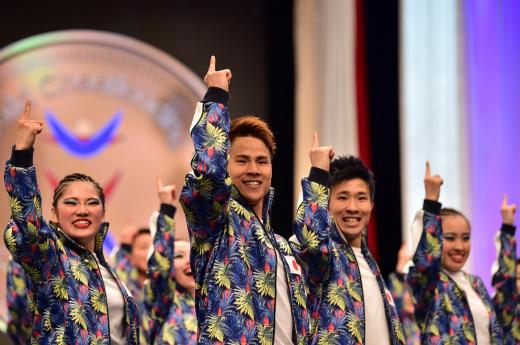 In this year’s competition, the pair of Mr. Matsuo and Mr. Omoto, who participated in Hip Hop Doubles, won first place (gold medal) for four years consecutive, and Team Cheer Hip Hop also won first place (gold medal) for three years consecutive.
Mr. Omoto, who achieved his fourth consecutive championship in the Hip Hop Doubles, shared: “This time, we challenged ourselves in improving the quality of not only our acrobatic skills but also our dance skills. I am very happy that this was highly regarded and that we were able to give it our best so as to be chosen no.1 in the world. I am deeply appreciative to my parents, coach, team members, and the many people that supported us, which led to this fourth consecutive win on a world stage. Making this experience a fresh new start, I will continue to work hard to always give our best performance, without forgetting my sense of appreciation and my aim to become a dancer that can help many other people gain their own personal courage.”
Mr. Matsuo, who served as a team leader, commented: “There was pressure, as other teams were hot on our heels, but we continued to practice, not concerned about other groups but aiming to give a performance that exceeds our own limitations. It was a challenge for all of us to be in rhythm with new choreography and structure with a higher level of difficulties than before, but during the competition, I was able to dance fully enjoying it with all my heart, with the spirit to send my appreciation to those who are watching and also to send them hope, while expressing through dance the struggles that we have surmounted in anticipation of this day. We will continue to practice harder so that we can continue to strive to exemplify the beauty of dance.”