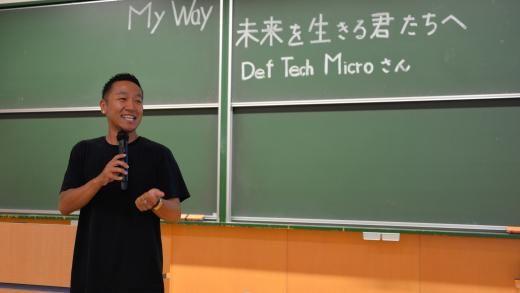 On June 6, the “Human Studies” class of the freshmen general education course of the Faculty of Letters welcomed singer Micro (actual name: Yuki Nishimiya) from the group, Def Tech, who delivered a lecture titled, “My Way: To My Young Friends Who Live the Future.”

Micro co-founded Def Tech, a reggae duet group with Shen, who is from Hawaii, and established a unique style called “Jawaiian Reggae,” which combines the reggae styles of Japan and Hawaii. With many hit songs, they have become popular and have appeared in the 2005 annual New Year’s TV program, Kohaku Uta Gassen, sponsored by NHK.

On this day, Mr. Kenichi Miura, who is a Soka University alumnus (Faculty of Letters, 39th graduating class, currently an associate professor at the Higashi Nippon International University), and a friend of Micro served as the emcees. After a joyful introduction of lecturer Micro by Mr. Miura, who also mimicked him in the introduction, Micro entered the classroom and from the outset sang his major hit song, My Way. The atmosphere of the classroom was quite different from the usual 9 a.m. atmosphere. Some female students were even moved to tears.
In his lecture, Micro spoke under the theme, “Human Strength,” and shared about 18 human strengths that he learned from a senior when he was still new in his career—life force, ability to take action, wisdom, ability to make decisions, physical strength, ability to absorb, centrifugal force, instantaneous power, vitality, destructive power, perseverance, ability to forge ahead, ability to concentrate, ability to memorize, ability to persuade, ability to embrace others, economic power, ability to guide others—and he asked the students: “How many of these do you think you have?” and “How do you think you can acquire these human strengths?” In this way, the lecture was carried out in the form of dialogue.

He then shared that the way to acquire all these strengths lies in a “way of life in which we devote ourselves to others” and to be “fearless of mistakes.” He shared various personal experiences, including his friendship with Shen and the mistakes he made in the entertainment world.
He also named Soka University founder Dr. Daisaku Ikeda as one who possesses the 18 human strengths, stating that this is due to the fact that he has thoroughly lived his life by “devoting himself to others.” He also shared the great path of always embracing the mentor (Ikeda) in one’s heart.
He also shared that, in order to fulfill one’s dream, just as the Chinese character “叶” (fulfill) indicates, the key is to vocalize one’s concrete goals 10 times. The lecture was moving and convincing, consistently based on his personal experiences, and the one hour passed by in an instant.

During the question & answer session after the lecture, many lively questions were asked, such as “How do you sing in a way that can move the listeners’ heart?” and “Micro, what is your ultimate goal?” Even after the event, Micro continued his dialogue with students who wanted to join him in the cafeteria. He warmly responded to each student and gave advice from various angles. It turned out to be a very joyful, significant, and unforgettable moment for the students.