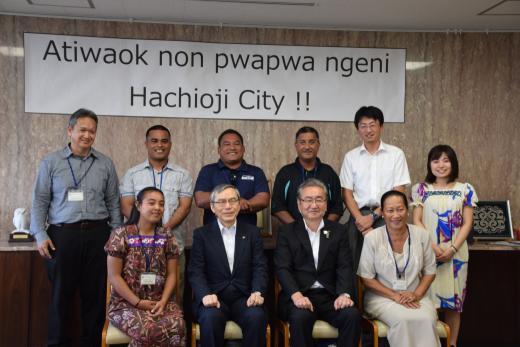 On June 19 (Wednesday), in relation to a waste disposal support project that Hachioji City began in Chuuk State of the Federated States of Micronesia in the southern Pacific Ocean, a party of six from the Environmental Protection Agency of Chuuk State visited the Hachioji City Office together with President Yoshihisa Baba of Soka University, a cooperative university of Hachioji City, and met with Hachioji Mayor Takayuki Ishimori.

Last year, on August 28, Hachioji City tied a three-year outsourcing contract with the Japan International Cooperation Agency (JICA), which is an independent administrative institution, and sent city staff to Chuuk State of the Federated States of Micronesia.
In this project, Soka University’s faculty and students are cooperating to improve the situation in the Federated States of Micronesia, an island nation in the southern Pacific Ocean, in their dealings with the issue of huge volumes of waste left outside homes or in the ocean.

Mayor Ishimori asked about the current situation of this project, which is now in its third year, and Mr. Atson Nakayama, a staff member of Weno Municipal Office, shared his greetings as follows: “This project is very important for Chuuk State. Ever since the contract was agreed on, the waste issues in Micronesia have improved in tandem with your technological assistance, such as in establishing a waste collection system and enacting regulations that prohibit the usage of plastic bags. We are deeply appreciative to Hachioji City, JICA, and everyone at Soka University. I hope that this friendly relationship will continue for a long time.”