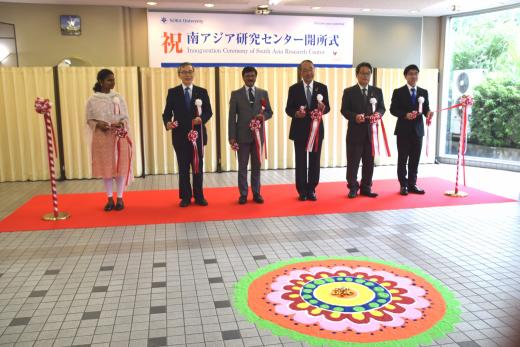 On July 16 (Tuesday), at Soka University Literature Building C, an opening ceremony took place for the South Asia Research Center, which has as its purpose the promotion of research and exchanges with Southern Asian countries.
The ceremony was attended by Indian Ambassador to Japan Sanjay Kumar Verma, Second Secretary of the Embassy of India in Japan Karan Yadav, and approximately 50 faculty and students of Soka University.

At the opening ceremony, Professor Mukesh Williams of the Faculty of Letters, and who serves as the center’s vice director, read out a message from Principal John Varghese of St. Stephen’s College at the University of Delhi. This was followed by greetings by Soka University President Yoshihisa Baba, who shared: “We would like to contribute significantly to not only to the solution of various issues confronting Southern Asian regions but also the world, along with working for the peace of humankind, and further, the prosperity of culture around the world.”

At the end, Indian Ambassador Sanjay Kumar Verma shared his congratulatory words, expressing his expectations that the center contributes to the development of Southern Asia countries through its research activities while communicating with various institutions, aiming to contribute to the Sustainable Development Goals (SDGs), as designated by the United Nations.
The opening ceremony was followed by a commemorative symposium titled, “Peace of Southern Asia and Digital Media,” held at Soka University’s Central Education Tower “Global Square.”