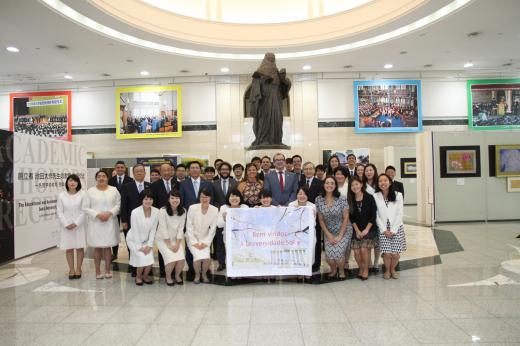 On August 2 (Friday), an honorary doctorate was conferred upon Soka University founder Dr. Daisaku Ikeda from Federal University of Sergipe, which is the only university in the state of Sergipe, located in northeastern Brazil.

The conferral ceremony took place on the 17th floor of the Main Building, where Rector / President Angelo Roberto Antoniolli, Mrs. Josephia Eide de Souza, and others from the university attended, and were welcomed by Soka University’s Chairperson of the Board of Trustees Yasunori Tashiro, President Yoshihisa Baba, representatives of faculty and staff, students, and international students from Brazil.

The Federal University of Sergipe was established in 1968 and has six campuses within the state, with approximately 26,000 students, including a graduate school.
Rector Antoniolli shared, “The council of the Federal University of Sergipe, to which I serve as president, unanimously decided to confer an honorary doctorate upon Dr. Ikeda, who is prominent in the world as one of the greatest humanists ever known, with outstanding achievements. Based on this decision, and in appraising Dr. Ikeda’s actions toward an outstanding purpose that is based on humanism, along with recognizing his brilliant achievements in promoting peace, we confer our university’s highest honor upon this global citizen, Dr. Ikeda. His persistent action in the fields of education and culture has opened up new horizons around the world.”
Soka University founder Dr. Ikeda also shared a message, which was read out on his behalf, as follows: “There is a great poet from your esteemed state of Sergipe, named Tobias Barreto de Meneses, who is an honored philosopher of the Brazilian Academy of Letters and whose birthmarks its 180th anniversary this year. What were the ‘wings of the heart’ of this poet, who sang about the great soaring of the soul? It was ‘appreciation.’ He said that ‘the heart of appreciation is an eternally indestructible virtue.’ With my deepest appreciation, I humbly accept this glorious honorary degree, which I have received today from your esteemed Federal University of Sergipe, the top citadel of science and education in your esteemed country.” Dr. Ikeda also shared the three points of “Create a garden of human flowers of ‘ceaseless growth,’” “Enact an indomitable and victorious drama on the ‘earth of daily life,’” and “create a solidarity of youthful global citizens toward ‘sustainable development.’”

After the conferral ceremony, Rector Antoniolli and his party met with the exchange students from Brazil that are studying at Soka University. A lively discussion unfolded as exchange students asked questions such as, “What efforts are being made by the university to contribute to Brazilian society, where disparity is expanding?” and “What is the focus among the Sustainable Development Goals (SDGs) upheld by the United Nations?”