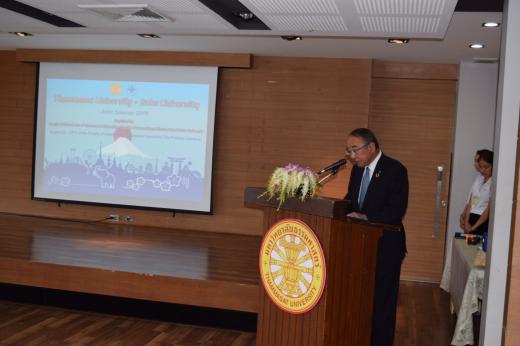 The first joint seminar was held in 2017 based on the proposal made by Noranit Setabutr, president of the University Council of Thammasat University. This year’s joint seminar, which marks the third time the seminar has been held, was held under the theme of “Roles of Global Citizen Education for Sustainable Development and Peace Promotion.”

In the seminar, Board of Trustees Chair Tashiro talked about the importance of fostering human resources that can contribute to solving global issues in an increasingly globalized society and stated that Soka University wants to contribute to this through the joint seminar. Then, Gasinee Witoonchart, rector of Thammasat University, said, “I want to make today’s seminar an opportunity for us to learn from each other and enlighten each other about the mission and future of these universities. This is the third joint seminar that we have held together, and I am sure that it will lead to the further development of exchanges between these two universities going forward.”