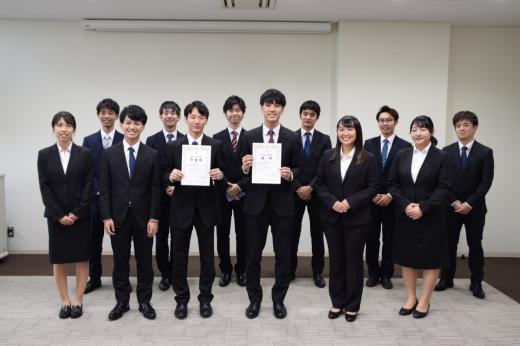 Soka University Economics Theory Association won first place for the 14th time and for the third consecutive time, following the previous contest, at the 31st Economics Record Examination (ERE) University Contest (sponsored by the Japan Economic Studies Education Association), which was held on July 7 (Sunday). The award ceremony took place on August 26 (Monday) at Soka University, and certificates were presented by the Administrative Office of the Japan Economic Studies Education Association to crown the champions, Mr. Yuta Goto (Faculty of Economics, junior) of the Theory Association Team A and Mr. Kazumasa Higashiguchi (Faculty of Economics, sophomore) of the Theory Association Team B, which won second place.

In this ERE University Contest, five to nine students from one group can register among student seminars and clubs that belong to a university or graduate school. This is a competition where groups compete on two subjects in microeconomic and macroeconomic studies based on the total points obtained by the top four students.

At this 31st ERE University Contest, a total of 109 students from 15 teams of eight schools participated. Two teams participated from Soka University, and Team A won with an average of 372.5 points. Team B came in second place with an average of 345.0. Also, in terms of individual results, among all examinees of all ERE subjects, Mr. Goto won first prize and also an “S” ranking, which is the highest appraisal possible. (Mr. Goto is the only student that obtained such a ranking)

Mr. Higashiguchi, the chief of the association shared, “We were able to come in second place thanks to everyone’s support, so I would like to express my deepest appreciation to them. We studied once every week and learned from each other, and on a personal basis, I exerted myself in focusing on studying the fields that I am not good at. I am so happy that such effort bore fruit. I will continue to make efforts to improve my academic abilities, aiming to become a champion at the next contest with the spirit that ‘each individual leads the team."
Mr. Goto, who won first place in terms of individual results, shared, “I was able to show some great results thanks to the support and cooperation of the team members. I cannot express my appreciation enough. In this contest, our junior team won second place. In the Economics Theory Association, there are many outstanding juniors, including club chief, Mr. Higashiguchi. At the next contest, I am convinced that our junior team will become the fourth consecutive champion. From now on, I would like to focus on activities that will contribute to our juniors and to the university.”