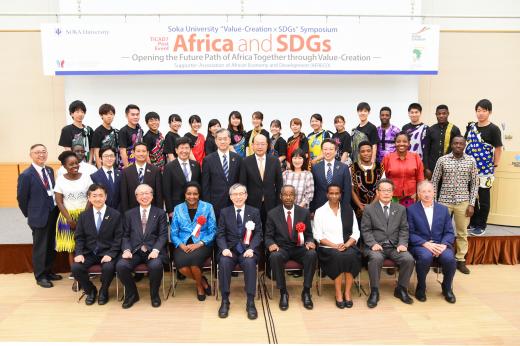 As a collaborative project under the Seventh Tokyo International Conference on African Development (TICAD), on September 1 (Sunday), the “SDGs and Africa – Creating a bright future in Africa through value creation” symposium was held at Pacific Convention Plaza Yokohama.

The symposium is a part of an anniversary project directed toward 2021 when Soka University will celebrate its 50th anniversary and aims to contribute to the promotion of the United Nation’s Sustainable Development Goals (SDGs). The symposium was held with support from the Association of African Economy and Development Japan (AFRECO) and as a collaborative project under TICAD7.

Three breakout sessions on “peace,” “human rights,” and “environment/development” were held in the morning, and the symposium was held in the afternoon. Soka University President Yoshihisa Baba stated that Soka University will uphold the educational goal of fostering “creative global citizens” and will contribute to the realization of a global society that can carry out the SDGs and that “will leave no one behind,” through initiatives such as education and research. In addition, he briefly touched on the fact that founder Daisaku Ikeda has considered that “the 21st century will be the century of Africa” and talked about how Soka University has concluded academic exchange agreements with 13 universities in nine African countries while conducting about 400 student exchanges. Then, Ambassador of Zambia Ndiyoi Mutiti and Ambassador of Zimbabwe Titus M. J. Abu Basutu took the stage and gave keynote speeches.

Following the welcome performance by the Soka’s University's Pan Africa Friendship Society, a presentation about a project (PLANE3T Project) in which Soka University and African universities are cooperating and theme-based presentations by students that participated in the breakout sessions in the morning were given. Then, the symposium ended with a panel discussion held with Executive Director of the International Tropical Timber Organization (ITTO) Dr. Gerhard Dieterle and others.

Feedback from the participants includes the following:
“It was meaningful because I was able to hear about local issues in Africa directly from African people, including the two ambassadors. In addition, the students’ presentations were very useful as model cases for promoting ESD. The discussion about the 17 SGD goals made me think about what we can actually do.”
“I could feel the ‘real’ Africa in the performance by the Pan Africa Friendship Society. Through the panel discussion including experts from various backgrounds, I was able to gain a different viewpoint.”
“I was able to exchange opinions with people from different countries about issues that I am not generally interested in, and it was a very stimulating day.”