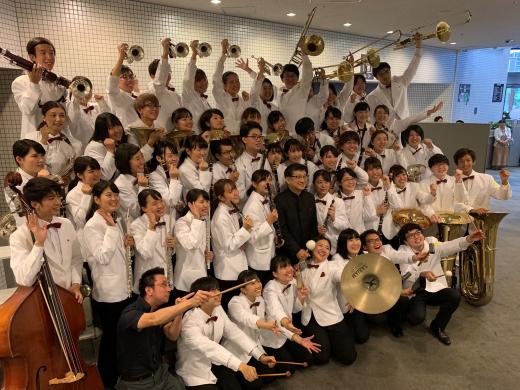 The Pioneer Wind Orchestra played with all their strength a set piece of music, Bismuth Psychedelia I (composed by Takafumi Hikage) and a free program, “A paraphrase from Opera ‘The Tale of the Blackened Canteen’” (composed by Yasuhide Ito) conducted by composer Yasuhide Ito, and were awarded a ticket to the national contest. The judges commented: “Each musician has great skill, and they are exceptionally well balanced. They created an ‘artistic’ piece of music,” and “It was a wonderful performance that was well worth listening to.”

Orchestra conductor Ai Kaneshiro (a sophomore with the Faculty of Business Administration) said, “For this contest, we practiced while also discussing what music we wanted to perform and what passion we wanted to convey to the audience. We chose a piece of music composed based on ‘peace’ as the theme for our free program, and on stage, we were able to perform the music with our wish to spread peace by cheering up the people in front of us. Now, we will further come together for the All-Japan Competition, and while being grateful to all those who support us, we will keep practicing with the aim of performing pioneering music.”