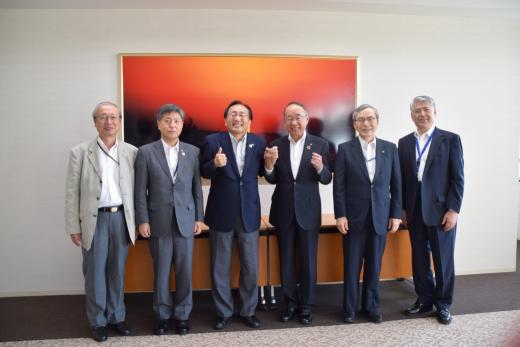 On September 6 (Friday), a group including Aomori Prefecture Governor Shingo Mimura visited Soka University and held talks with Board of Trustees Chair Yasunori Tashiro, President Yoshihisa Baba, and the staff of the Career Center.

During the discussion, Governor Mimura made the following comment: “I would like many students, including students from Aomori Prefecture, to learn about Aomori Prefecture. I would also like to further enhance collaboration through the employment promotion agreement with Soka University so that the students will receive information about companies in Aomori Prefecture and are able to picture a career plan in which they return to and work in Aomori.”