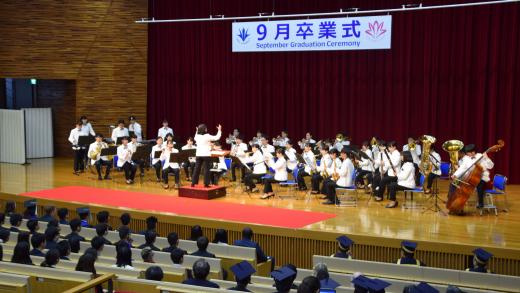 At Soka University, from the class of 1999, the “semester system” was implemented to divide a year into half, and starting in 2003, a September graduation was introduced in addition to the March graduation.

At the ceremony, after a commemorative performance by Pioneer Wind Orchestra, Soka Women’s College President Mr. Noboru Mizumoto gave opening remarks followed by the reading of Soka University Founder Dr. Daisaku Ikeda’s message by Chairman of the Board of Trustees Mr. Yasunori Tashiro. Founder Dr. Ikeda encouraged the graduating students to “keep Soka’s pride in your heart, keep your head up and chest high, and move forward regardless of what hardships you face in your life of great mission.” Then, as the diplomas were handed out to each student, the instructors and staff, student representatives, and the parents of the graduating students gave big applause.

Soka University President Mr. Yoshihisa Baba told the students to live a life of value creation with the founder’s principles of “For what purpose should one cultivate wisdom? May you always ask yourselves this question!” and “Only labor and devotion to one’s mission in life gives life its worth,” in their hearts.
To conclude and for the departure of a new journey, everyone in attendance sang the Soka University Student Song.