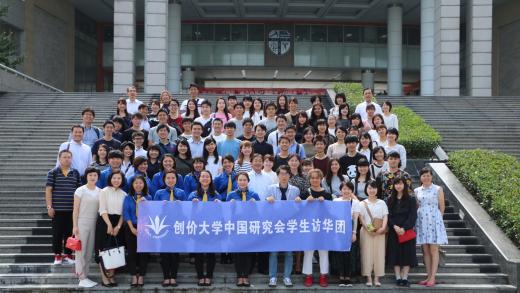 On invitation by the Embassy of the People's Republic of China in Japan, a group of 71 student representatives, which included the Soka University China Research Club, and nine representing instructors and staff visited various regions in China for six days from September 4 (Wed.) to September 9 (Mon.). The group held exchange meetings with students at Peking University and Southwest Jiaotong University, and also visited the Great Wall of China and the Foreign Students On-the-job Training Center of the Standing Committee of the Sichuan Provincial People’s Congress.

After arriving at Beijing Capital International Airport, the group was welcomed by members of the China-Japan Friendship Association. On the second day, the group visited the Great Wall of China and the Palace Museum, and in the evening, they participated in the welcome party held by the China-Japan Friendship Association. At the party, students from Soka University and Beijing International Studies University each gave a song & dance performance, and the students had lively discussions at each table, where they deepened their friendships.

On the third day, the group visited Peking University, where a student exchange meeting was held. The group discussions and campus tour gave them an opportunity to exchange their desire for friendship between China and Japan beyond the language barrier. Students who participated in the exchange meeting gave the following feedback: “I felt that the most important thing in friendships between China and Japan is just for young people to smile and talk about ideals. In addition, when we took the campus tour, I found written on the wall of the school building, ‘Never forget original thought, continue to advance forward, come together and make China powerful and strong,’ and I strongly felt that Soka University students have a lot to learn from Peking University, as China’s highest seat of learning.”

On the fourth day, the group toured the city of Chengdu, including the Luodai Ancient Town, which introduces Hakka culture in Sichuan, the Standing Committee of Sichuan Provincial People's Congress, the Chengdu Urban Planning Center, etc. On the fifth day, the group participated in an exchange meeting with students of Southwest Jiaotong University, along with attending a farewell party. During the student exchange meeting, lively discussions were held on topics such as environmental problems, employment problems, and differences in cultures and customs, followed by experiencing traditional tie-dye handicraft under the guidance of students from Southwest Jiaotong University. The students that participated in the student exchange meeting said, “I felt that China is more advanced than Japan in terms of consideration for the environment, such as bicycle sharing, which is not common in Japan. However, students at Southwest Jiaotong University said that waste sorting in Japan is excellent. I am certain that if we can respect and recognize the good parts of each other in this way, both countries will be able to further develop and contribute to a large number of global issues in addition to environmental concerns.”