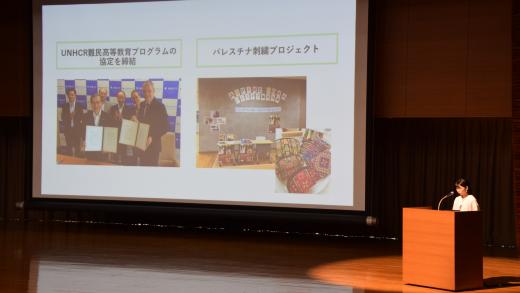 On October 5 (Saturday), at its Discovery Hall, Soka University, as the UNHCR WILL2LIVE Cinema Partners, showed the film “Sonita” from the Refugee Film Festival, where approximately 150 students and public audience participated.

The purpose of this film festival is to expand the understanding of refugees through films and it is carrying out promotion activities collaborating with universities and educational institutions. Soka University, which has tied a collaboration agreement with UNHCR, participated in the school partners as it did the previous year. The event was co-sponsored and prepared together with Soka University’s student group ASPIRE SOKA that promotes the United Nation’s peace movement.

Before the film showing and after the greetings from Soka University President Yoshihisa Baba, a representative of ASPIRE SOKA, Ms. Chihiro Matsunaga (Faculty of Law, senior), shared the current status and issues pertaining to refugees and the importance of taking spontaneous action to build a peaceful society.

The film “Sonita” is a documentary that shows how an Afghanistan refugee girl who aspires to become a rapper, continues to advance forward as she surmounts numerous challenges. Comments from the viewers were as follows:
“I was encouraged by how she continued to challenge herself without being defeated by adversity. I understood the situation of refugees and thought that it is important to start from what I can do.” (Female High school student)
“I didn’t have any opportunity before to know the actual situation but learning about the shocking situation in Afghanistan and its national traditions, I felt the urge to contribute in some way.” (Male student, 20s）
“I was moved by Sonita, who desperately lived her life to change her environment with her own strength and squarely faced hardships. I learned about the situation of refugees, which is something that we don’t see in our daily lives.” (Female company employee, 20s)
“I was shocked to see the reality of a woman, who is living under intense circumstances. But still, she continued to live strong, which made me think a lot. I am looking forward to next year’s event.” (Female, 40s)
“The reality of the Rohingya people that I learned about at last year’s film festival was also shocking but there are many scenes that you don’t want to see, and it is hard to believe that such things are actually happening on this planet. I felt that I want to take action even a little, starting from what I can do.” (Male, 50s)