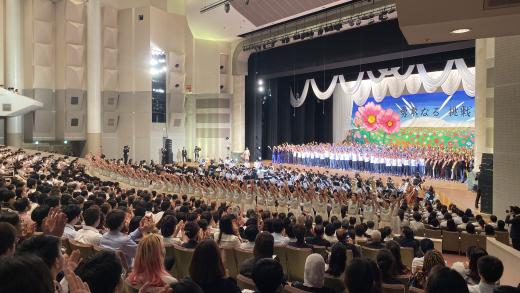 In part one of the event, an opening movie was shown with performances by the Pioneer Wind Orchestra. After a dance performance by Ichariba Chodays (an Okinawa dance group), the Soka Women’s College students and the Vocal Group sang, and the Pride of Soka also performed. After a dance by international students from over 30 countries, students from the U.S., U.K., Ghana, and South Korea gave a speech in Japanese. After a choral performance by student representatives and the Vocal Group, the event concluded with all the participants singing the Student Song.

At part two’s commemorative ceremony, after greetings by President Noboru Mizumoto of the Soka Women’s College, Board of Trustees Chair Yasunori Tashiro introduced a message from the founder Dr. Daisaku Ikeda.
The founder stated:
“I believe that the time has come for humanity to once again direct their focus on the unlimited possibilities of human life, which is unparalleled and dynamically expansive, and above all, its strength to ‘create value.’”This entails wisdom, courage, and compassion that can accurately and keenly recognize the changes of world affairs, which comes with the rapid pace of globalization, while making the best use of science technology that shows remarkable progress, including IT, for the happiness of the people and peace and coexistence of the entire globe. The quintessence of humanistic education is found in the ability to bring forth from the depths of each person such wisdom, courage, and compassion, which we can say are the conditions for global citizens, and train and gather such strengths. (Abbr.) As the founder of the ‘fortress for the peace,’ I have blazed a path of dialogue in the world. Transcending all differences, I entrust to my beloved friends of Soka alumni to further widen and freely expand the great path of dialogue called ‘trust’ towards human beings and ‘learning.’(Abbr.) And from today, I ask you to advance courageously and cheerfully, while studying together with global citizens of foremost good, stimulating each other and challenging yourselves to create new value every day.
I am praying and supporting you so that each and every precious day of your youth will shine with a courageous seeking mind and friendship, and I am looking forward for you to expand your great solidarity of humanism, and open up a happy future for humanity. Please remain healthy and free of accidents as you win a fulfilling autumn season.”

In his commemorative speech, Dr. Price shared that the founder Dr. Daisaku Ikeda’s poetry touches many people and profoundly touches individual lives. He provides guidance for us to achieve a better self and to summon forth the goodness inherent in our lives. However, it is clear from his publications that such transformation is not limited to the individual alone. “The World is Yours to Change,” he said.

Before the commemorative ceremony, a presentation of the Schliemann Award to commend students with an outstanding language learning ability and those who passed national exams this academic year took place.

The event opened to the general public from the following day on the 5, where exhibitions, outdoor booths, as well as events sponsored by various clubs and groups took place. The International Students Café run by international and Japanese students was packed with many people where traditional food from 9 countries was served.