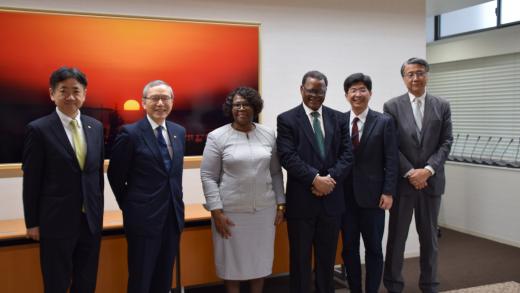 The University of Zululand is located on the eastern coast of the Republic of South Africa and was established in 1960. The university consists of four faculties, including literature, education, and science. Currently, approximately 18,000 students are enrolled.

In this meeting, a lively exchange of views took place regarding the future exchanges between the two universities. President Mtose, knowing the founding spirit of Soka University, talked about how he was inspired by the founder’s spirit for peace, which he had built through dialogue. The president also talked about how he treasures humanism as Mandela Children and finds a similarity between the ideals of Soka University and the University of Zululand. He hopes that students from both universities will have exchanges and deepen bonds of friendship.