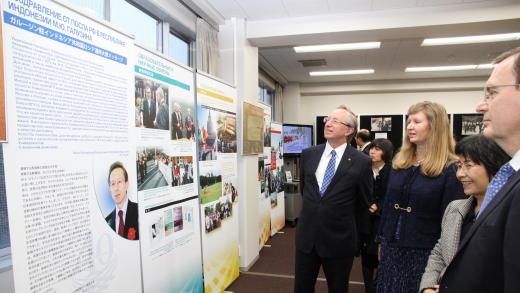 During his time at the Moscow State University, Ambassador Galuzin studied abroad at Soka University from 1982 to 1983 and learned Japanese. After joining the Russian Ministry of Foreign Affairs, he served as the Russian minister to Japan as well as the ambassador to Indonesia. He was inaugurated as the ambassador to Japan in January 2018. Ambassador Galuzin is also known to be the most knowledgeable person about Japan among the Russian Ministry of Foreign Affairs. He has contributed to the diplomacy between Japan and Russian at crucial moments, including serving as an interpreter for former Russian Presidents Gorbachev and Yeltsin.

Ambassador Galuzin also devoted himself to the opening of Japan’s one and only Russian Center, which was established at Soka University for Russian culture and language education in 2016. In June 2018, he gave his first lecture at Soka University after being inaugurated as the ambassador. With exchanges conducted to date as a start, the commemorative lecture this time was delivered during the common course “Humanistic Education Studies,” in commemoration of the 45th anniversary of Soka University’s friendship exchanges between Japan and Russia. In conducting his lecture in Japanese, Ambassador Galuzin shared about the current challenges of Russian diplomacy, the current international relationships, as well as the prospects for the future, while raising five points including “Energy security” and “Community exchanges” as examples of current Japan - Russia diplomacy.

While recollecting the memories of his days studying at Soka University, Ambassador Galuzin said, “What I learned during my study abroad at Soka University was truly contributing to my work and life. Even in the recent events of exchanges between Japan and Russia, Soka University students, who learned Russian, have always participated and are playing an active role, which I think is truly wonderful. With the cooperation between Russia and Japan, we have been able to produce fruitful results to date. I believe that the key to further development lies in strengthening a trustful relationship through various exchanges including cultural exchanges, while also cherishing the connection with countries around the world. I hope that you will all continue to learn more about Russia.”
After the lecture, participating students expressed their appreciation for the lecture in Russian. Ambassador Galuzin answered questions pertaining to Japan-Russia exchanges and memories of his student days while encouraging the students.
During his visit this time, he also toured the Russian Center.