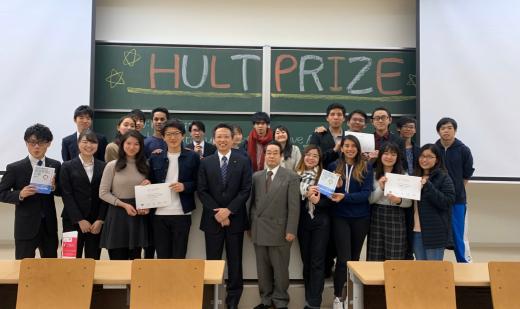 On December 8 (Sunday), the Hult Prize Business Contest, which aims to foster entrepreneurs that can help solve global issues of society, took place at Soka University’s Central Education Tower ”Global Square”. In this event, which took place for the first time at Soka University, 22 students from six teams participated amid cheers from students that came to show support, with each team giving a presentation in English. Team Green Getters, which won the championship, proposed a business using new materials that replace plastic so as to help solve plastic waste issues.

The Hult Prize Business Contest is participated in by over 2 million students every year worldwide and provides a venue for the creation of ideas that can help solve global issues. When a team wins at their own campus, they can attend the overseas preliminary contest held at 27 venues worldwide, including Boston, San Francisco, and Tokyo. Later, finals are conducted among the top teams, and the most-outstanding ideas are awarded 1 million dollars (approximately 100 million yen) for the acceleration of commercialization. Former U.S. President Bill Clinton and the UN are official partners, and every year a theme based on the UN SDGs (Sustainable Development Goals) is announced. In the contest this time, the theme was “Building Startups That Have A Positive Impact On Our Planet With Every Dollar Earned.”

Mr. Taiki Yamamoto, a junior in the Faculty of Economics and who is the operating representative of this event, shared: “I feel that being able to host this event for the first time served as a step toward creating history for Soka University. In this event, presentations are made by those aiming to become entrepreneurs that can solve serious social issues, possibly being awarded one million dollars for their cause. This would not be an easy task for students that do not have any experience in establishing a business to devise, in a short time, new project ideas that can transform the world in a decade. I am appreciative that everyone challenged themselves despite lack of any precedent. Also, there were many new experiences had as an operational team, and we were able to learn a lot from many mistakes. Lastly, I want to express my deepest appreciation to everyone, including university staff, judges, and participants. It is because of you that we were able to successfully carry out this event.”