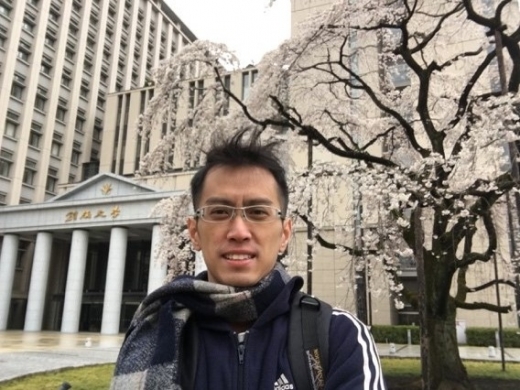 What led me to Soka University

Before my graduation from a degree program in Chemical Engineering from the National University of Singapore (NUS), I decided to go on a holiday graduation trip to Japan with some good friends. As part of our trip, I had the chance to visit Soka University in April 2013 and was heavily captivated after observing the abundant sakura (cherry blossom) flowers, lively peaceful campus atmosphere, and most importantly the values of the university founder. It was my second time visiting Japan, with the first in 2011 when I did a short immersion autumn exchange program at The University of Tokyo. However, all along, I’ve been contemplating to do a Master's Program with content related to both Economics and Business. However, I had explicit clarity of purpose that I wanted to come to Soka University instead of other Japanese universities as I was seeking good quality education that’s not based on academic elitism. I recalled reading the following quote by the University Founder: “I believe that the university's mission should be to serve people who, much as they might have wished, have not themselves been able to receive higher education” and “For What Purpose should one cultivate wisdom? May you always ask yourself this question!”. This quote left an unforgettable impression upon me, as it reminded me of my Chinese-educated parents who only completed until junior high school education level in Singapore. Thanks to my parents, I came in touch with the philosophy of Soka Education since young, as they enrolled me, when I was 5 years old, to join the pioneer batch intake of Singapore Soka Kindergarten from 1993 to 1994. In late 2015, I chanced upon Professor Mariko Honma, then Dean of Economics in Soka University, who visited Singapore during an event. She encouraged me to apply for the English Economics program when it was established. Indeed, I was very fortunate to join the program earlier than expected in autumn 2016. 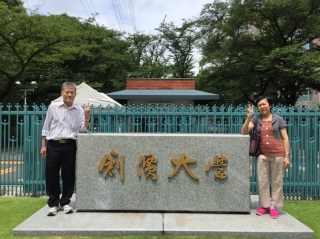 My parents posing at the main entrance of Soka University
Graduate students can freely choose & take different courses from both Business and Economics faculties. For myself, as I was more interested in macroeconomics-related subjects, I took courses related to International Trade, Monetary Policy, and other business subjects. I witnessed first-hand how Professor Koji Kobayashi and Professor Konomi Saito patiently supported me as I just began settling down and living in Keikan Dormitory during my first year. To cite a few examples, Professor Koji Kobayashi patiently guided me in my research thesis on Monetary Policy throughout the two years. One day, I recalled him even bringing a bun (manju) back from his business trip for me to try! It was Oishii (simply delicious)! Professor Konomi Saito patiently taught me the subject of Advanced International Trade, dedicated her efforts to support a few IBSP students in the internship program at SMBC Bank headquarters in Otemachi, and supported me in other areas. Professor Manabu Asai is also very intelligent and knowledgeable in his field of research, co-authoring papers with other leading universities in Northeast Asia, and I learned much from him in the module of Quantitative Finance. In the Business Faculty, I also took a statistical course, which was taught using RStudio, an important tool in the rapidly changing Digital Economy. In short, as they knew I was from Singapore, they communicated English with me, which vastly benefitted my absorption of the content since I was not required to learn the subjects using the Japanese language.

Before coming Soka University, I did not have an international mindset. Arriving in Tokyo in my late twenties without knowing any Japanese language at all, was indeed very challenging for me in the first two semesters as I urgently accelerated my pace to absorb Japanese language, in order to get daily food necessities, and interact more with the local Japanese undergraduates in the university and in Tokyo city. In Soka University, I am super grateful to be given the opportunity, by some other Japanese language professors, to audit some of their basic to intermediate language classes.  Life in Soka University is not just about studying. I have wonderful and fun memories joining Soka University Festivals in 2016 and 2017, both as a helper in the Southeast Asian food-stalls, as well as performing in the Southeast Asian cultural dance segments. I was also working as a part-time English essay tutor helping Japanese undergraduates for 1.5 years and contributing to the University’s World Language Centre activities. Through various activities, I cultivated friendships with Japanese undergraduates, and international friends from South Korea, Philippines, Thailand, Nepal, India, Brazil, Ghana, Dominica Republic, Germany, United States. In addition, living in Keikan University dormitory enabled me to travel to central Tokyo to attend events organized by the Singapore Embassy of Japan. In the era of Digital Economy, it is increasingly important for future graduates to sharpen their EQ by being eager to learn about other cultures, whilst appreciating inter-cultural sensitivities. I strongly believe this IBSP program empowers master students to learn from one another and their customs/habits and countries.

Returning back to Singapore to Fulfil my Potential

After returning to Singapore, I found a role in a department within the Prime Minister’s Office (PMO) Ministry of Singapore. I sought a career in the Public Service, as I recalled the University’s Founder educational ideal are individuals who can contribute to a peaceful society in their own countries. After being nominated and eventually receiving the Japanese Government (MEXT) Scholarship from 2017 to 2018, I realized Japan faces many issues with its economy. I could slowly discover my potential to contribute to strengthening the existing economic relationships between Singapore and Japan, especially in emerging areas of digitalization. Now, I am currently working on Advanced JLPT N2 & higher. All the above experiences would not have been possible without the support of my IBSP’s Professors, my parents who supported my decision. Of course, Keikan Dormitory was also key for me to live through the four seasons in Japan!
I will highly recommend everyone to apply for the IBSP program so they can experience Soka University for themselves.