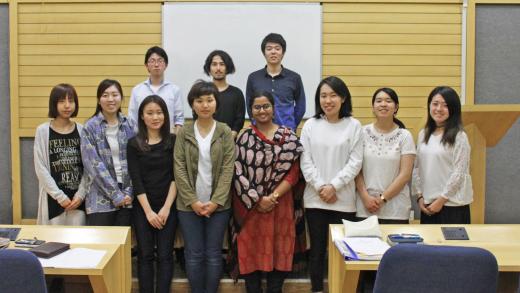 It has been a week since study abroad started today. All member seemed to be relaxed and get used to this new environment.

We had breakfast at 7:30 in this morning and left Guest House at 7:45.
Two dogs came around us, wagging their tail soon after we arrived the college. In India, I have seen dogs live by people without any interests in people like animals in wild fields. On the other hand, many Japanese people have dogs as their pets and there are few dogs outside of houses. Only pets can come by people. Stray dogs in Japan run away from or attack people with caution. Because of that, I was surprised. 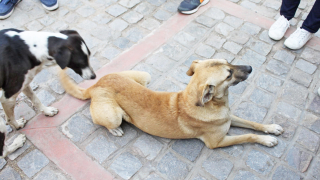 The ceremony was already started when we entered in SSC’s chapel. The organ sounded, singing voice was echoed sacredly and birds were also singing outside. It was beautiful place.
At 9:00, the assembly started. The table tennis club’s success was announced and trophies and medal were awarded to its members. After that, we went cafe in the college. We ate "St. Stephens bread roll" with tea. It was very spicy, and made with ginger. Ginger is also a Japanese traditional spice. Therefore, I felt my home country in the food. 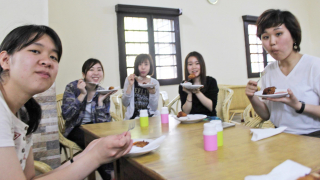 We reviewed and discussed about yesterday’s class before lunch at Guest House. We have eaten much vegetable ant less meat recently, so we can become goats. Today’s class started at 13:45. Its topic was Buddhism, the continuation of yesterday’s class. It was difficult but very interesting, so we asked questions to the professor, Ms.Alphy Geever in even tea time. She praised our attitude toward learning in the end of class. 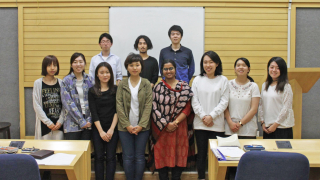 Today's dinner was special. It was had in our room. The menu was Biryana! It was historical food because the emperors of Mughal Empire had eaten it. Biryana was like Chahan, Japanese fried rice. It was unbelievably delicious. The meat of goat was soft. One of spices in it was cardamon. Our teacher tell me the cardamon was the best medicine. It help digest and have power kill all the germ. Therefore it was used to refresh mouth, in many foods, and as insect repellent. I tried to eat, but it was not delicious. I do not know how it make biryana such delicious. Crove, the popular spice was also used in biryana. It was used for toothache. I found goat’s hair in biryana. In Japan, I have never seen any food with animal’s hair. I felt that meal was an act of eating other’s lives. 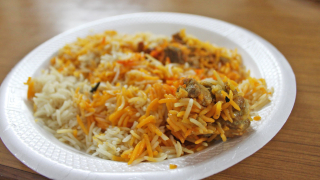 We could enjoy in India today too. There are many things to learn here. All of them are important for our lives.