The creation of the student song 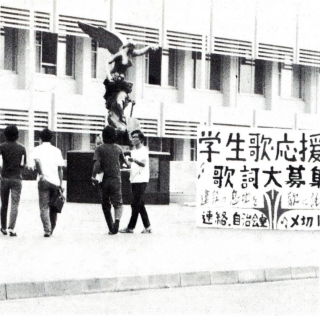 In autumn 1972, the 2nd Soka University Festival Steering Committee comprised of the executive chief, 3 vice-executive chiefs (2 representing the classes, 1 representative from gakuyukai – Student Association Club), 43 executive members (representatives from each class, 8 representatives from Student Association Club (gakuyukai), 4 Co-operative representatives). At the 1st Speech Contest held on September 22, aside from publishing the Trace of the Youths (Seishun-no-shupuru) that records the history since the university opened, there were plans to create a student song. Thereafter, the School Song Committee was created and the call for song lyrics applications was held. 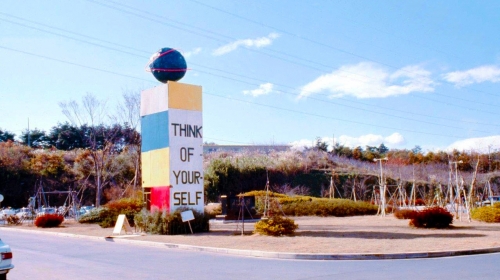 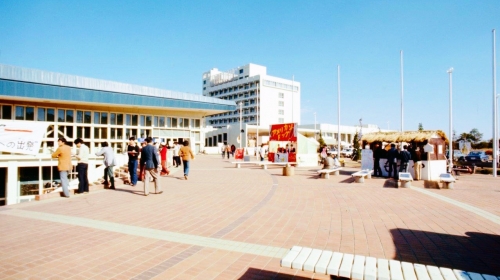 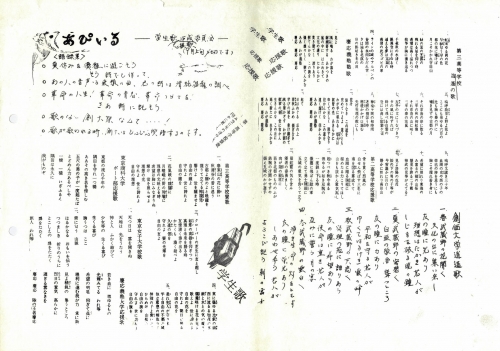 Promotion page in the poster made by the 2nd Soka University Festival Steering Committee
After much consideration, the lyrics written by Hiroshi Oki (pen name) were chosen, and the melody written by composer Shin’ichi Kawakami (1st batch, Economics) was selected amongst the others submitted by the music club. After the song was edited, it was announced at the commemorative festival.

The creation committee was initially unable to obtain the real name of Oki Hiroshi to contact him to edit the lyrics. After searching and finally finding his artworks from the Art Club, the committee only managed to contact him a few days before the festival. The editing of the student song continued through late nights even until a few days before the announcement, and the song was finally completed on the day of the announcement on November 24, 3 AM. During the editing stage, the student song was written in four stanzas. (final version has only three stanzas) Final lyrics completed a day before the announcement
The founder arrived at the campus in the afternoon and attended the unveiling ceremony of the monument inscribed with three mottos expressing the founding spirit, held in the garden in front of the Liberal Arts Building. After the unveiling ceremony, he visited the exhibitions held in various classrooms. 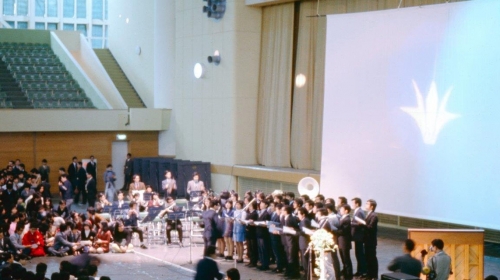 The chorus performed the student song for the first time 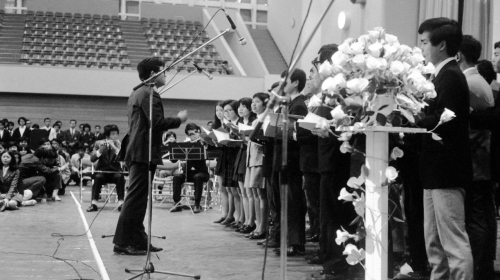 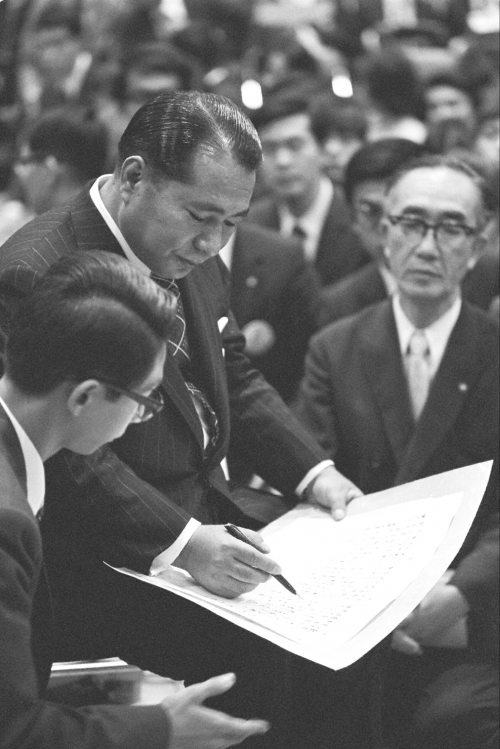 The founder who was editing the lyrics（©Seikyo Shinbun）
The New Human Revolution, Volume 15, Soka University Chapter

“Over the scarlet hills covered in blooming azaleas….”

Shin’ichi followed the lyrics on a copy prepared for him by the Steering Committee as he listened. It was a rousing melody. The lyrics too, had a poetic quality, brimming with ideals, hope and aspiration.
The song brilliantly captured the school’s founding spirit.
Shin’ichi was deeply impressed.
When they finished, he picked up the microphone and asked, “Who created this song?”
The composer and lyricist raised their hands.
“It’s really wonderful,” Shin’ichi said. “I was very moved.”
Hearty applause shook the gymnasium.
“But, if it’s all right with you, I’d like to make a few slight revisions. Is that OK?”
The lyricist nodded, and the audience cheered and applauded even louder.

After obtaining the lyricist’s approval, Shin’ichi made his suggestions.
“In the first stanza, I’d like to change ‘Solid white butterflies dance joyously’ to ‘White butterflies dance joyously,’ and ‘A refreshing breeze blows powerfully through the air.’
In the second stanza, ‘The spirit of righteous anger burns in our hearts’ might be better as ‘The spirit of justice burns in our hearts.’
In the third, I’d suggest changing ‘The distant horizon beyond the vast green mountains’ to ‘Mount Fuji in the distance beyond the vast green mountains,’ and the last line from ‘For whose sake do we inquire into the truth of life?’ to ‘For whose sake do we seek the truth of life?”

The student who had written the lyrics was impressed. He felt as if President Yamamoto’s suggestions had hit the mark. They were all parts he had fretted over and worried about until the last minute.
The school’s founder had transformed stiff, clunky phrasing into easily accessible imagery. Now, through the joint efforts of Shin’ichi and the students, the Soka University Student Song had been completed.

Red highlighted parts were edited by the founder 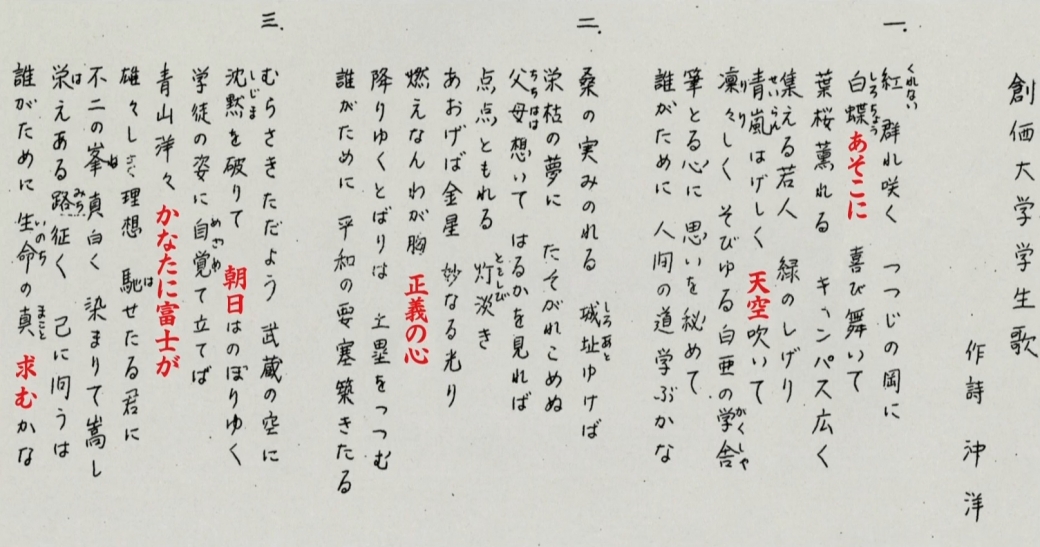 
Your stance and passion, truly befitting the ideal of university students, have been fully and clearly manifested in today’s Soka University Festival.

In the future you will all advance on your respective paths, but there is no such thing as a smooth and easy path in life. The bigger your goal or objective, the greater the difficulties you will encounter on your way. The person who overcomes these is a person of outstanding excellence. Once you decide that something is your true path in life, you should consistently exert yourself to the fullest on that path, in your respective position of responsibility, never shirking or seeking to avoid painful challenges. Unless you overcome such challenges, I don’t think you can become “the real thing.” This is the foundational point for human education.

This is why I want the members of the first and second classes to consider yourselves founders of the university and exert yourselves with real determination. Everyone has a destiny or fate that cannot be avoided. When you determine to embrace this destiny, it can be turned into mission and your entire life can made to shine. I hope you will appreciate my sincere expectations and that each of you will carry yourselves as founders of this university. Recording of the Student Song released for sale in 1974