Soka students and the student song

Photos of students singing the student song were taken by the university staff and student union.

A mural depicting the student song, created by members of the Art Club in response to the proposal of the founder, was completed on the basement floor of the Liberal Arts A Building, and was visited by the founder on December 11, 2004.
The mural, 2.3 meters long and 9.4 meters wide, depicts scenes from the student song, including “azaleas”, “butterflies”, “cherry blossoms”, and “mulberries”, in a fan-shaped frame wh Mount Fuji in the background, A total of 128 members including graduates and those related to the Art Club were involved in its production.
※ The basement of the Liberal Arts A Building is currently inaccessible. 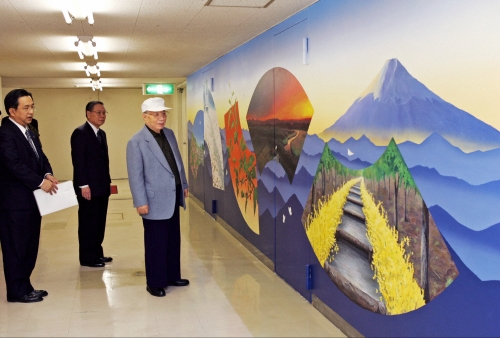 The founder viewing the mural of the Student Song（©Seikyo Shinbun） 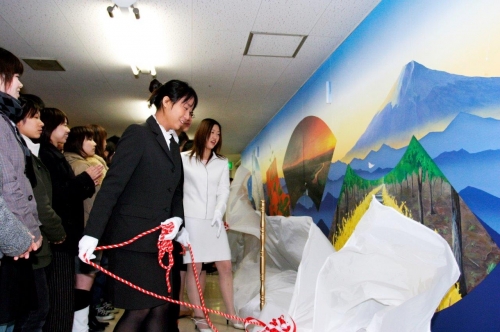 Opposite this mural was another mural (2.3 meters long and 14 metres wide) created by members of the Art Club at the time to celebrate the 15th anniversary of Soka University.

A Student Song corner is currently exhibited at the 50th Anniversary Special Exhibition
– 50 years of Soka University at Central Tower. 「Return to the Main Page of Student Song」