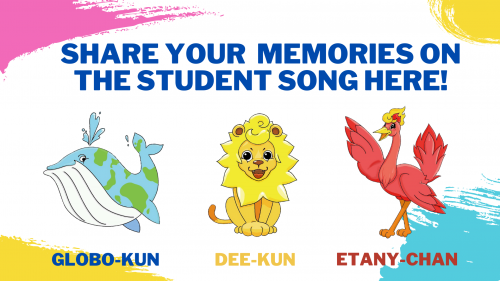 Stories of the Student Song


Soka University Alumni
When I was still a student, I sang the student song every day. In the school dormitories and after club activities ended. At commemorative events, I also sang countless times with the founder. I knew from my student days that the song lyrics were not written by the founder, but I felt that the lyrics encompass the expectations of the founder and the students’ determination. It was nice to see this commemorative website and it was my first time knowing about how the song was written at that time. Of course, I will never forget singing with the founder on my last day as a student, but the best memory I have of the student song is after the International Students’ Café held during the Soka University Festival, when we formed a circle with international students from many countries at the Tomodochi Garden, shoulder to shoulder, we became one and sang the student song after the international student song. I am deeply thankful to have come to Soka University.


Current Soka University student
When I was a 5th grade elementary school student, I listened to the student song for the first time when I attended the open campus, as I had long to attend Soka University in wanting to meet the founder. My first impression of the song was that “it is so cool”, I thought. It was then I started to memorize the lyrics, and it became my motivation to study when I hummed to the song. Later, I studied hard as I promised my late grandfather that I would enroll into Soka University. This year, I enrolled into Soka University as the 52nd batch and joined the Pioneer Wind Orchestra. Just like how I was encouraged by the student song before I enrolled in Soka University, I am determined to practice hard every day to convey hope and encouragement to the people who watch our performances as a member of the orchestra.


Soka University Alumni
There was once before the entrance ceremony started, the Ginrei-group choir sang the student song for the students. I decided to join the choir group as I was impressed by their voices. Since then, the annual concerts and the Hagi-no-yube concert would always end with the “Student song”. Since graduation, I have always been humming and singing the student song, which has given me courage countless times. Whenever I hear the prelude of the song, it elevates my spirit and I would straighten my back. I will always treasure this significant student song forever.
「Commemorating the 50th Anniversary of the creation of
Soka University Student Song」